What to do with a Problem Employee 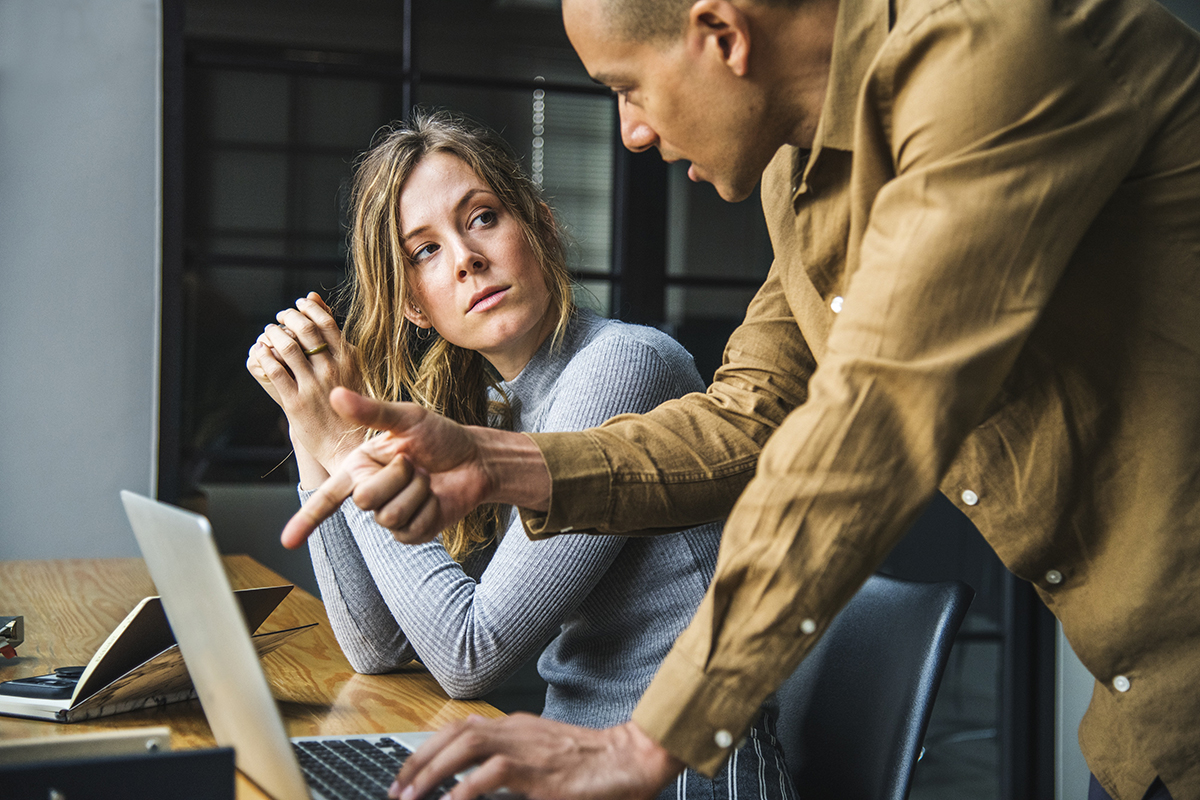 Do you have a ‘Problem Employee’ in your business or organisation?

Every single business wants to be able to measure their financial returns against any and every investment they make. Including it’s employees. So what to do when you have a ‘problem employee’?

The Cost of Doing Nothing

Before we discuss the solution, we’re first going to address something critically important. It’s a very rare company that comes to me and says “Here’s our top performer, can you improve their performance by 5-10%? Now can you do that with everyone?” Yet every high performance sports person in the world has a coach (or often many coaches). Instead, most businesses come to me saying “Here’s a problem we’re unable to fix. We’ve tried everything we can think of. Now it’s your problem, we’ve invested enough of our resources.” You know what, I get it, I really do, I run my own businesses too. However, for this solution to work, we need to think differently.

What they need isn’t training, it’s coaching, and when it comes to coaching, real success doesn’t need to be measured, because it results in such a profound difference – everyone will notice! In contrast a poor coaching (training) program would help an employee improve their productivity in one or two areas. More easily measurable, but ultimately have negligible real impact for that individual in the business. Creating a temporary fix at best, although more likely, just a temporary distraction from the real performance issues. Most businesses approach employee coaching as ‘how little can we invest and get away with?’ What’s the risk vs reward? What they usually miss however, is the substantially bigger cost of not doing the right thing about it?

20 years ago when I was working as a trainer in adult education, there was a poster on the wall that said “If you think education is expensive, try ignorance”. Later I came across this one “There’s one thing worse than training your staff and they leave, it’s not training them and they stay.” What’s the immediate and ongoing cost to your company each month, of not solving this? How many hours have team members and managers already invested talking to them, talking about them, listening to them, working with them, inspiring them, motivating them, etc.? How long has this been going on? What’s the true, on-going, long-term cost of all that added up?

The real hurdle here is not in the potential for transformation (although that is a factor), it’s the question you’re asking that’s the real problem. Our language creates the context we function in, meaning our words shape our environment – we are what we think and say. When we call something a problem, we want it dealt with, handled; we look for a quick fix, for an easy solution, a way out. Instead let’s now call it an opportunity, and see what that makes available? “Really?” I hear you ask. Yes, really! You’ll be amazed at what such a simple little change in our language (and thinking) can produce.

“Ok, what’s the opportunity here?” I’m so glad you asked!
Now that we’ve flipped it on it’s head, things get interesting… because now there is a real and significant opportunity here. The opportunity that 95% of the time doesn’t even come up, when businesses are wondering what to do with their ‘problem’. Let me ask you this, what do you think might happen to everyone else in the office, when your problem transforms in to opportunity? What happens when they become the inspiration to everyone else? What could be the long-term, compounding effects of that?!
You didn’t sack them, hide them away, or performance manage them out. All of which would could have done and caused untold negative repercussions right across the organisation; like fear, mistrust and resentment. Instead you nurtured, invested in, cared for and developed your staff member. All of which manifests reciprocity, inspiration and loyalty – a true team environment where people flourish and results follow. Someone who was once a drain on resources is now an inspiration to everyone, a literal role model employee. Now that’s an opportunity worth investing in.

Did I move too fast. I wonder, is that a reality you are ready to see? Was that a “Yes!” I heard you say?

Transforming Problems in to Opportunities

Excellent, we now have a new future we’re stepping in to, but how do we get there? Unless you have first-hand experience with this type of transformational coaching, the process and benefits can be challenging to explain, so let me start with an analogy.

When coaching a single individual, what I’m intending to do is the equivalent of launching a rocket, that doesn’t know it’s a rocket. I have to generate an enormous amount of momentum with surgical like precision.
To give a single person the breakthroughs that you want them to have, they want for themselves, and I want them to achieve; they must transform many of their beliefs, behavioral patterns and potentially even their values. None of which will happen without their willingness, and even their desire to change. They make the changes, not us. Before a person can launch though, that person needs something from us.

At the core of every human being is the need to be loved and accepted. Referred to as the ‘3 Universal Fears’, every single human is asking themselves one or more of the following three questions:

15 years ago, before I got in to coaching I would have dismissed those fears as weakness and repeated sayings like “Suck it up princess”, “They just needs to toughen the F# up.” or my Dad’s favorite “He’s big enough and ugly enough to take care of himself.” Today I know better and with my language completely transformed, the people around me simply show up differently. My two boys at ages 7 and 8 compete in domestic basketball against 11 year olds, and in tennis against kids up to twice their age and twice their height. Success is the result of -belief, it’s not about ability. What’s that saying? “It’s the size of the fight in the dog, not the size of the dog in the fight!”

We need to nurture a person’s own self-belief, to trust in themselves and those around them, that they feel safe enough, to take that leap themselves (we can’t do it for them). To launch themselves bravely in to a new future.
Looking at challenges/opportunities like this and wondering how to minimize the cost, is like trying to launch a space shuttle with a rubber band. There is no magic pill. We’re talking about a complex human being with years of behavioral repetition and deeply ingrained beliefs. Challenge a human the wrong way and they will dig in and fight for their current way of being. If that happens it will ensure the past repeats. Nurture their inner soul and they will grow to be giants. When a business expects overnight success from a challenge that has been persistent for many, many years, they’ve missed the real opportunity here.

There’s a saying in the executive coaching world that ‘The fish stinks from the head down.’ Meaning that a challenge experienced at the bottom rungs of an organisation usually begins somewhere at the top. It’s not like a bad thing, or a wrong thing (because right and wrong have no place in coaching). It’s simply what is, such as ‘is the light switch on or off?’ When we (coaches) notice a limiting behavior or belief, we create awareness around it and direct the individuals involved to naturally create their own solutions. In doing this every individual knows what we know and is empowered to deliver their own solutions, thus making them even more capable, more resourceful, and more trusting in themselves. You see, we know everybody already has everything they need within them now.
Considering everybody already has limitless potential and it just needs unlocking, isn’t the real opportunity then, unlocking everybody’s potential? Why only unlock the limitless potential of your most challenging employee? That would be like launching the space shuttle with nowhere to go. Eventually it will just come back down to earth.

Smart companies see challenges as opportunities and create smart solutions. They are on the leading edge in everything they do, believe in, and stand for. A smart company who wants to see an employee transform in to an inspiring leader, wants all it’s employees to transform in to inspiring leaders. Whether I work with one of them, their core leaders, or all of them, we’re going somewhere special. When one of these companies comes to me, they don’t ask me to ‘deal with a problem’, they ask me to ‘inspire a culture of greatness’.

The smart move isn’t then to improve the performance of your worst employee, but to improve the performance of every employee. If you want to change the culture of your organisation to one that naturally inspires greatness and pulls people to be, do and deliver their best? Hire your coach full-time (or part-time for smaller organisations) for 3, 6, 12 months, or even longer. Make them a core part of your team and launch your entire organisation to a whole new level.

Now we’re cooking (launching) with gas. No longer is mediocrity our target. We’re now shooting for the moon and if we miss… who knows, you might just end up amongst the stars.

To better understand the unique growth process I use, click here to learn about The New Model Of Leadership.

Here’s to your success,
Ross Pepper